I love to be creative and even though the third paper in the CIPD series, is entitled “Insight and Intuition”, it does a lot to help explain what creativity is about. It looks at how insight leads to ideation and in turn innovation, whilst considering how both skills can boost creativity and problem solving. It also considers what can block creativity and which tools can help. All in all a helpful paper so lets get stuck into the meaty bits…..

So some definitions….. “Insight is about how we come to understand things and intuition is, in essence, about how we think, reflect and act.”

Some real nuggets here …. but I always have to think about “so what does this mean?” So the things I will take away from this are:

What do you think about insight, intuition and creativity? 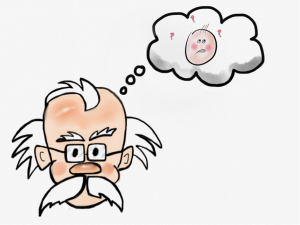 There are some days that I find it very easy to make decisions. My brain seems to be in the right gear and it feels quite natural which way I should go. Other days there seems to be a fog of questions and I feel like making a decision is like wading through treacle. Some people also strike me as being very decisive, whilst others tend to do more dithering than deciding. So how can we help others to make decision making, easier? In this series of blogs, I have been looking over the latest research from the CIPD on neuroscience and looking at how I can apply this practically to what I do as a trainer. I have in the past run workshops on decision making, which this, I might add would have been really useful for! In the paper on Cognition, decisions and expertise (1) it discusses two types of thinkers:

In reality people flit between the two modes, but the real interest lies in those who are experts in their field. How do they make decisions so quickly? The research suggests that experts do very little thinking, they just recognise familiar patterns. Pennington and Hastie suggest that people create stories. One of their examples looked at jurors and found that they looked at evidence and facts and then filled in the stories with their own assumptions. Interestingly though, Simon and Chase(1973) proposed that it took 10 years to become an expert in anything, whereas Ericsson et al(1993) suggested it took 10,000 hours. There are some things, which can help people to come to decisions more quickly:

Well the plot thickens…….. this gaming lark I mentioned in my last blog….. why it works…….it is all about synaptic plasticity …..so the researchers think!

The brain can keep growing… I knew that snippet from some research done on London cabbies (1) and linguistic experts. The research shows that for London cabbies the posterior hippocampus grows as the cabbies learn more routes. This is a part of the brain associated with visual-spatial memory apparently. As new neural connections are made, the brain grows and changes, hence the term “neuroplasticity”. Previously it was not thought possible that the brain could develop in later life.

Researchers have particularly been looking at the use of video gaming and the effects on the brain. They seem to think that it could be “a promising method to ‘take the brakes off adult plasticity’ (Bavelier et al 2010)” (2) They are not sure how it works but it has something to do with the uptake of dopamine to the midbrain.

For those of you who do not know, dopamine is the happy hormone that is released when we think we are going to get a reward (or when we are eating chocolate!!!) (3) With the right amount of dopamine, learners are engaged and wanting to participate. Too much dopamine and the learners get a bit giddy and do not really remember much about what they have learned, but love the experience.

So back to what we were talking about …synaptic plasticity….this is the process of changing connection strengths between neutrons, which is also considered the basis of learning (Shohamy and Adcock 2010) (2). Video games are thought to be such an immersive activity and hence they heighten learning by stimulating the reward centres of the brain.

So my question, as always is “So what?”. Let me put into a nutshell, what I think we need to do, to incorporate some of this brain stuff into the learning experiences we design and deliver:

Everyone is talking about it…. neuroscience….and if you are not why not? Does it seem like the latest in a long line of fads? Or just a bit too geeky? I am never afraid of being labelled an “anorak”and so will admit that I have been reading the CIPD’s papers on Neuroscience (references at the end) to see what useful stuff I can use …. and share….

One comment that stood out for me and this may seem like I am about to contradict myself here… is from Stella Collins (my colleague in all things brain friendly):

“If you’ve done something and it really works, you’ve implemented some kind of piece of learning, piece of training, you’ve helped people in some way and it works and you can’t find the piece of neuroscience that backs it up, that might not matter. I don’t think everything has to be backed up by neuroscience because they just may not have discovered it yet.”(1)

My most recent venture has been the Learning Loop, a game for training trainers, whatever their experience. It has been going down a storm and participants have been really engaged with the whole format. It takes the focus away from me as a facilitator and focusses on what the learners already know, building upon it and sharing with others. So why does this work so well?

“Research at Bristol University confirmed children’s preference for uncertain reward in a learning task and, in a study with adults, demonstrated how it increased the emotional response to learning (Howard-Jones and Demetriou 2009).” (2)

During the game, the participants seem sooooo excited about winning up to 5 wooden beads for answering a question….. it is down to me how many beads they are awarded, depending on how full (in my opinion) an answer they give. Other teams are allowed to “steal” extra points and they do so with much enthusiasm. I thought it would work, but now there is research, that shows the use of uncertain rewards can increase the emotional response it helps me to understand why.

I have known (and observed) for a long time that competition in training works well and adds an element of fun as well as focus, but it is great to hear that there is research that backs up what for a long tine has been for me “just a feeling”. Which brings me back to Stella’s point …. if it works… keep using it……

John Medina, in his 10 Brain Rules states “Vision trumps all other senses” and he quotes studies that show that recognition doubles for a picture compared with text.

So why does PowerPoint take such a prominent position in training, especially slides, which contain predominantly words? Too many times trainers use the PowerPoint slides not as a visual aid, but as a prompt for their presentations.

Moving away from a presentation style and making learning more interactive, allows us to use visuals much more to enhance the learning experience. By using activities and making training learner-centred as in accelerated learning sessions, we make it more memorable.

As a starting point, we can add relevant pictures to the PowerPoint slides – sometimes using quirky and humorous pictures can make the learning stand out more and make it stick. A PowerPoint slide presentation, though very portable and flexible, is fleeting. The slide appears and then the next one comes along. They also only cover one part of one wall. To make your training room look appealing , inviting and exciting, using flip charts and posters on the wall can provide an extra dimension to the learning. 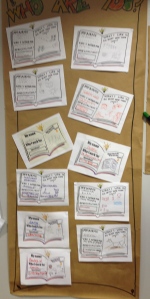 Because we are drawn to pictures, even whilst doing other activities, we will take in what is on the walls.  We can use part of the wall space by means of an introduction as in the photo to the right. We can also use the walls during the initial coffee time to get people to write down what they would like to get out of the session.

At the last Brain Friendly Learning Group in Leeds, I ran a session called “Flipchart Frenzy” where we spent two hours learning how to:

[youtube https://www.youtube.com/watch?v=uYzHCfhSHrk]
The flip chart below shows the feedback from the session. (WWW stands for “what went well” and EBI stands for “Even Better IF”) 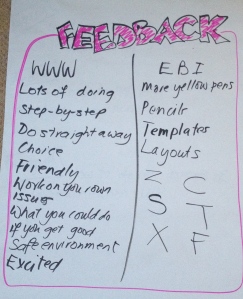 What a pleasure it was to have Larry Reynolds at the Brain Friendly Learning Group on Friday in Leeds. The title of his learning session was “3 tools to boost the emotional intelligence of your learners”. I was not entirely sure what to expect, but we were expertly led by Larry to firstly explore the #microskills involved in storytelling.

The received wisdom in training is to firstly outline general principles and then drill down into the skills, which will underpin these. Larry challenged us to start with microskills and as we struggled to define these, we began a journey cleverly crafted and expertly facilitated.

Asking us 6 questions about a challenging time in our lives helped us to frame the story and allow us to share this story in a focussed, yet authentic way with a partner.

David Marsh from Blue Water Partnership bravely shared his challenging story with the group and we were invited to give him #feedback on his performance. The feedback was the second tool, which then carefully adjusted the microskills he had acquired to improve his performance in the future. Using the E2C2 feedback framework adjusted our feedback skills. The final tool we discussed was around creating #habits. I often feel that we are like memory foam and no matter how compelling the need to change our behaviour, met with some resistance, we often spring back to the familiar. So this final part of the session saw us discuss how we ensure that the new learning becomes a habit:

nfortunately the squirrel of destiny nibbled away at the nuts of time and this fantastic session by Larry came to an end….. thanks Larry it was fab!

After a short break we moved on to the Learning Clinic, where Teresa, Peter and David shared their tough L&D problems with the experts in the room and came away with a flipchart each full of solutions!

Carry on the conversation in the Brain Friendly Learning Linkedin group

If you would like to be part of a vibrant and varied group of L&D professionals in Leeds, where you can learn and get your tough problems solved, then come along to the next Brain Friendly Learning Group meeting on the 23rd of October 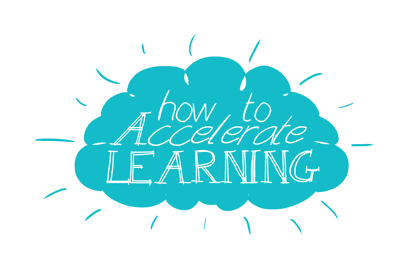 What are you looking for?

What have I been blogging about?

Read how we use your data here

You have Successfully Subscribed!