An unconference you say? What on earth is that?

In February this year I attended my very first unconference in Manchester, organised through an online community @LnDConnect and I loved it so much, that I attended my second this September. “So what on earth is an unconference?” you may be wondering…. so I will use bits and pieces gathered from here and there, as well as some graphics to try and describe what I have experienced and why I think they are marvellous!

Firstly there were some great people to network with in a friendly and relaxed atmosphere. There was no agenda, which was a little curious (I have been to a few conferences, so this meant I didn’t know what I was in for) but also a little exciting. We were going to co-create the agenda together as a group.

Of course there had to be some initial instructions on how the day would pan out, otherwise it would have been chaos. The facilitation team guided us and informed novices like myself about the process. There is something about skilled facilitators that create a great open space, that really draws you in and gets you thinking right from the start. 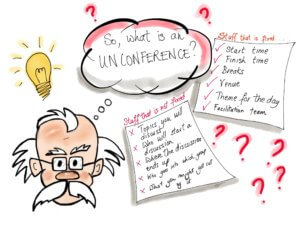 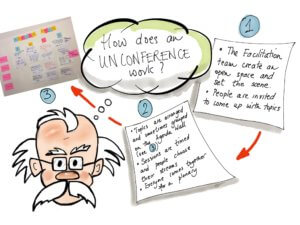 As we were invited to come up wth topics we were interested in exploring, it sparked off thoughts about which sessions I would like to attend, which I could best contribute to and what I would like to explore myself.  Topics were then grouped and an agenda emerged: 4 time slots and roughly 3 or 4 different topics per time slot. Quite a choice in a very short amount of time.

So what was it actually like? Apart from the initial nerves because it was new, we had some great discussions. Rather than one “sage on the stage” to draw from, there were many views, which made it a really rich and thought provoking experience. I took from it some real nuggets, which had really disrupted my thinking. I left having made some new friends and explored ideas from a rich pool of talent. I heard real life stories and experiences from many practitioners; successes as well as failures (you don’t often hear about those in a conference!) I went away feeling listened to, encouraged and uplifted, having listened to many experts (though they may not be widely seen as these).

In the graphics I have tried to summarise briefly, what an unconference is like and what happens. What I would really urge you do to is go and attend one; be prepared to listen, share and learn! You won’t regret it!

The Power of Stories

This blog was inspired by a short session I ran in the Experiential Learning Zone at the World of Learning in September 2015, with the team at Pearlcatchers.

Stories have been around a very long time. The oldest one recorded was written in 1200 BC and is called the “Epic of Gilgamesh”. It is based on real characters and was about a man who lost his best friend and so went on a long journey to search for the secret of immortality. The story is perhaps not a true reflection of reality but more like a Hollywood blockbuster, that has been digitally enhanced for effect. But nevertheless it illustrates the power of stories.

Stories are “narratives with plots and characters, generating emotion in narrator and audience, through a poetic elaboration of symbolic material. This material may be a product of fantasy or experience, including an experience of earlier narratives. Story plots entail conflicts, predicaments, trials and crises which call for choices, decisions, actions and interactions, whose actual outcomes are often at odds with the characters’ intentions and purposes” (Gabriel, 2000, p. 239).

So stories are part of our history, our cultures and we know how they work. But how many of you use stories in your training? Or those of you who do, to good effect?

Stories, in training can have many uses, so here are some of my thoughts on their use:

It is often useful to tell your own stories and I use Larry Reynolds 6 part start structure when I have to create one. It gives me a format and stops me from rambling on too long! Here is Larry’s story structure:

So here is my example of a story using Larry’s useful structure:

So what is your story? I would love to hear it!

Why holidays are important

Two years ago on the last day of my holidays I sat down in the air conditioned reception area of our hotel and outlined the details of a game for training trainers, called the Learning Loop. This idea had been percolating for some time, but needed some quiet reflective time away from my normal busy life to bring it to life. So what do you do on holiday?

Or do you really just leave it all behind and get a proper rest? In my experience, taking a real break away from everything has many benefits:

So what do you find happens when you take a holiday? Why have you found them to be important?

I love to be creative and even though the third paper in the CIPD series, is entitled “Insight and Intuition”, it does a lot to help explain what creativity is about. It looks at how insight leads to ideation and in turn innovation, whilst considering how both skills can boost creativity and problem solving. It also considers what can block creativity and which tools can help. All in all a helpful paper so lets get stuck into the meaty bits…..

So some definitions….. “Insight is about how we come to understand things and intuition is, in essence, about how we think, reflect and act.”

Some real nuggets here …. but I always have to think about “so what does this mean?” So the things I will take away from this are:

What do you think about insight, intuition and creativity?

There are sometimes when you plan for things to happen in a training workshop and they do. Other times you don’t plan and something quite unexpected happens. A few weeks ago, I was running a Learning Loop workshop for Illuminate Development in York.

The planned outcomes for the 2 days were around learning accelerated learning principles as well as boosting their creativity; something achievable and measurable. Something, that because of the very nature of the Learning Loop game, was beginning to happen.

As the afternoon went on though, something was sticking. In spite of their enthusiasm for seeing accelerated learning in action and experiencing its effects, something was stopping them from believing that they could implement some of the ideas that were growing.

The elephant in the room started to grow and it was apparent who was feeding it. One of the directors could not envisage a major client buying into doing things creatively and making them engaging. Their style was traditional and this was being imposed onto the organisation. What was I to do? Reassure them that their tough issues will get addressed later in the day? Ignore the elephant, hoping it will go away?

Seeing the passion for their business but also the frustration they were feeling, we stopped where we were and used some creativity tools to see how we could “break the rules” that were holding them back. Allowing time to address “the elephant”, gave two very busy and successful directors an opportunity to look at things differently.

They would say I fixed something for them, but actually, what I did was give them the space to come up with their own solution. A solution they put into practice the very next day when speaking to a prospective client. The courage and conviction they demonstrated was backed up by the deep seated passion for what they love to do and enabled them to step out in faith that they knew what they were doing.

The point of this story is not so much about what I did or did not do, but one of evolution. Session plans are great, as are focussed objectives, but if you ignore the elephant, it only acts as a barrier to change, no matter how motivated the individuals are.

Now this may already be obvious, but the cartoon for me, symbolises what happens when you don’t evolve as an organisation. The differences may not seem so great between a mammoth and an elephant, but they were great enough to allow one to survive. So what is holding you back as an organisation and stopping you from evolving?

Six Thinking Hats – will you play the game?

I imagined a scenario in a team where the team leader prompted the team members to “get creative’ and come up with some ideas. Whilst doing so, it reminded me of some of the blank faces I have seen when asking people to do just that. It also reminded me of how easily we can slip into judging without even realising we are doing it…….”that will never work here” or some equally idea crushing eye rolling…..

If this happens, the team leader could invite them to put their scepticism away and get back to “being creative”. After a few minutes they get back into the swing, the ideas start trickling in and then there is a snigger… the biggest creativity killer. “Come on lets give Jim a chance, that was a great idea” the team leader says, only half convincing himself. And so it goes on. Switching to critical (or black hat) thinking, the ideas are torn apart and the safe option is chosen. When the team leader asks for them to look at all the positives and benefits of a solution, they switch back to critical thinking all too easily.

So how would using the 6 hats explicitly make this better? I believe that we all like rules but that we find it hard to take on board new ones immediately, like “Lets get creative”, unless we are very practiced! In familiarising ourselves with what the 6 hats mean, we overlay in a situation, the rules we are going to use to act out the scene that follows.

Games are something that we grew up with and we knew that that not following the rules would be met with disapproval from the other players. Having explained the purpose behind de Bono’s parallel thinking concept, the rules are simple – you only use the mode of thinking that the leader has instructed you to use, otherwise the process breaks down. If we use the process a few times, then people start to believe it will work and then the rules become even more important, but less explicit. It becomes far easier to wave the prop (a correctly coloured hat) about and say “Come on guys this is meant to be white hat thinking, we have not moved onto red hat thinking yet”, because we know that white hat thinking is good for a while, but we will get a chance to move onto red hat thinking later.

I suppose my point is that the “game” of using the 6 hats, allows us in a fun way to enforce the rules and stick to the parallel thinking principles. This process then becomes quicker, the more practiced we become at switching hats, until we get to a point where the “rules” need never be spoken in a team where the process gets results.

Just as a last thought…. I asked the action learning set “In what order should we use the hats?” That was a very interesting answer and ………….another blog for another time………

What are you looking for?

What have I been blogging about?

Read how we use your data here

You have Successfully Subscribed!